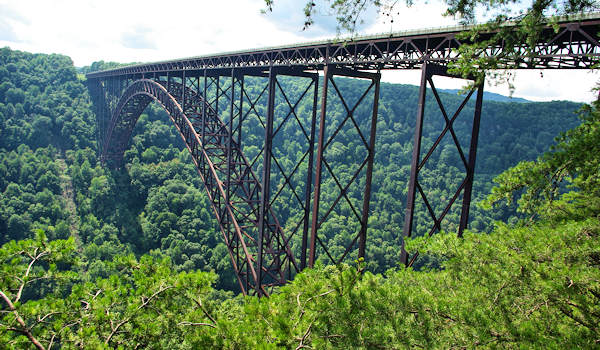 See the famous New River Bridge, the largest arch bridge in the world. It soars 876 feet above the gorge and is a modern engineering miracle – located in the New River Gorge National Park. It is just 34 miles from our cabin vacation rentals!

The bridge is a structure of amazing statistics: 3030 feet long, 876 feet high, 70 feet wide, 88 million pounds of U.S. Cor Ten steel and American cement. The span has become the symbol of West Virginia. 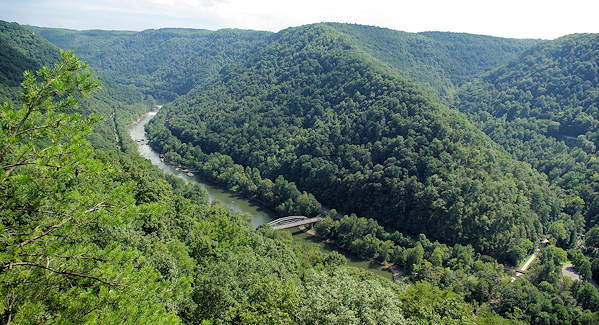 How to See It?
The Canyon Rim Visitor Center for the New River Gorge National Park is located on U.S. Route 19, just north of Fayetteville, WV. It features an exhibit room filled with photographs and exhibits on the people, towns, and industry of the gorge. Other displays focus on the recreation and natural history of the area. Watch two videos; on the construction of the New River Gorge Bridge, and on how the forces of nature created the massive V-shaped gorge. The auditorium provides visitors an orientation slide program on the park, and other special features and programs.

The most easily recognized attractions of the site are the views of the gorge and bridge. The back deck of the center offers a two-mile view southward into the park. Visitors discover the striking size of the gorge with one of the world’s oldest rivers at the bottom. A short hiking trail descends into the gorge on a wooden boardwalk. The boardwalk has two observation decks which offer unobstructed views of the longest steel arch span in the western hemisphere and the mile wide gorge it spans. A fully accessible ramp provides access to the upper observation deck.

Fayette Station Road Auto Tour
This fun drive takes you back in time before the modern New River Gorge Bridge was built in 1977. This 100-year old road of hairpin turns winds down to the bottom of the gorge, across a narrow bridge, and up the other side.

Bridge Day, the largest extreme sports event in the world, is held annually on the third Saturday in October in Fayette County, West Virginia. Hundreds of BASE jumpers and nearly 80,000 spectators attend the event. The 876′ tall New River Gorge Bridge, serves as the launch point for six hours of safe, legal BASE jumps. This is the only day of the year that traffic is shut down and spectators can safely and legally walk across the world’s second longest single arch bridge.

Places to Stay to Play
All of this is near our West Virginia cabin rentals near the New River Gorge: See Star Song 1 Cottage | See Star Song 2 Cottage